Optimization methods are an integral part of the training process of Deep neural networks, but most are using them as black box optimizers. This occurs because lack of practical knowledge about those optimizers. Today I'll try providing some intuition on some of the more popular algorithms.

With the aim of solving the problems above, many optimizers have been developed. Here I'd present you the most popular ones and explain what is their advantages:

To implement momentum, instead of using the derivative of the weights and bias independently for each epoch, we use exponentially weighted averages on them: 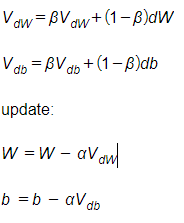 Where β is a hyper parameter called momentum and ranged from 0 to 1. The momentum term is usually set to 0.9.

Where g is the current gradient, and G is a vector, in which every i-th element is the sum of squares of the i-th parameter gradients. ε is used in order to avoid division by zero (usually 1e-8).

Adagrad's weakness is that the accumulation of the squared gradients doesn't stop and shrink the learning rate to eventually become infinitesimally small (i.e. the algorithm stops learning). 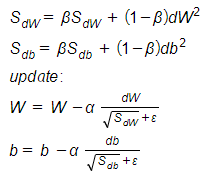 Where ε is there to ensure we won't divide by zero (usually 1e-8). 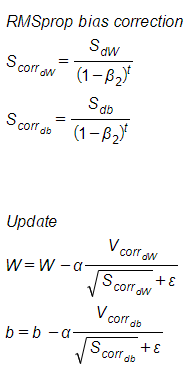 Where ε is there to ensure we won't divide by zero (usually 1e-8),  and the Betas are hyper parameters for the momentum and the squared exponential average (usually 0.9 and 0.999 respectively).

I hope that this post would help you to understand better the different optimization methods, and that you'd be able to pick the right one for your task.

using custom transformers in your machine learning pipelines with scikit-learn